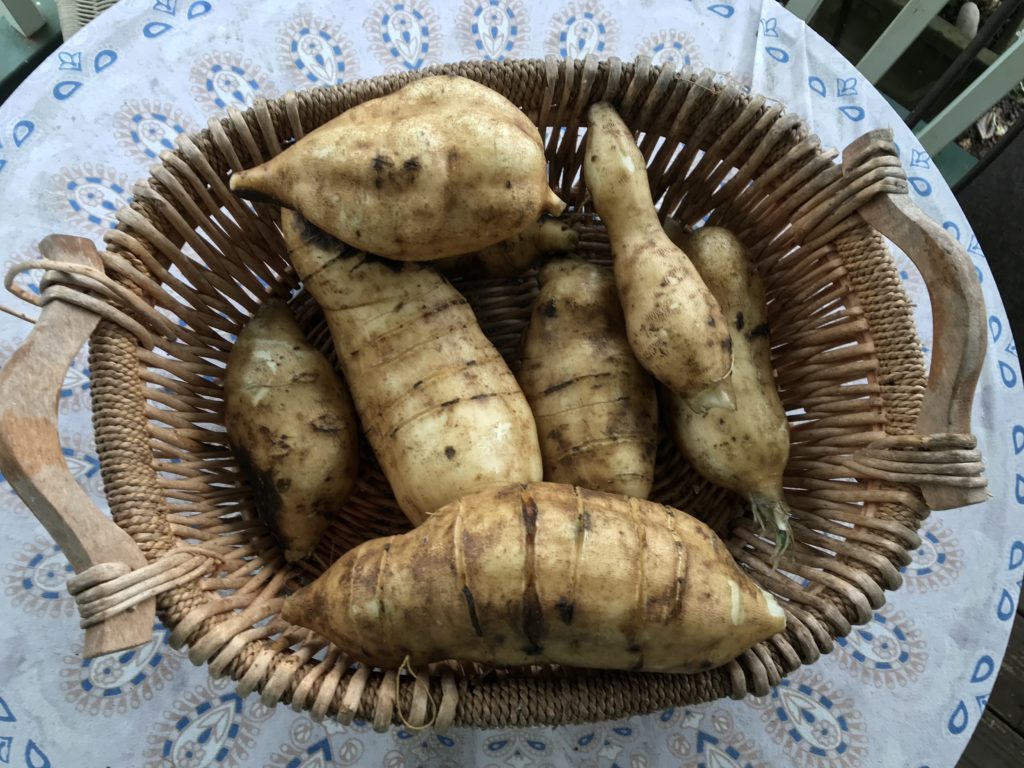 Yacon also called a Peruvian ground apple is a root vegetable packed with loads of nutrients.  It closely resembles jicama in taste and texture, although I find the taste sweeter.  Yacon is a species of perennial daisy.  The plant grows a pretty yellow daisy looking flower.  Yacon typically grows in climates with a gentle frost; something we obviously don’t have here along the Hamakua coast.  It does very well none the less.  To harvest, you simply dig up the tubers.  They look a lot like a Yukon potato, but larger.  Once harvested, the tubers actually get sweeter as they mature.

To eat, you simply peel and slice.  Some people like to eat them plain; others like it with a little salt and lime.  Once cut open, yacon oxidizes fairly quickly, and will turn from white to brown.  Sprinkling it with lemon helps slow that process.  It’s still okay to eat; it just doesn’t look as appetizing.  It can be eaten raw or cooked.  It is great in a stir fry or salad, and even as an addition to a fruit smoothie.  I’ve heard it has been made into jelly??  Not sure what that would taste like, but I’ve made jelly out of almost everything on our farm, I guess I need to try this as well!

Yacon means “watery root”.  Looking at the picture of the sliced yacon, you can see it has a high water content.  It contains a type of sugar called fructooligosaccharide, which can lower levels of triglycerides and low-density lipoprotein simply referred to as the “bad cholesterol”.  This sugar is from a nondigestible carbohydrate called inulin, which makes it sweet to the taste, but it doesn’t raise blood sugar levels.  It’s been known to aid in digestion, and actually feeds the healthy bacteria in your gut which is critical to overall health and immunity.

We have grown this off and on over the years.  It stores really well, and even tastes better as it ages.  It’s really easy to grow, and it has such great health benefits, we should really be eating this more.  I highly recommend this plant to any homestead.