We’re in the peak of coffee season.  We picked about 30 gallons of cherry last weekend, and another 10 today.  We’ll pick more tomorrow, but it’s just been too hot outside.  We try and get out as early as we can before the temperatures start to soar, but we made it out a little too late today. We have 133 trees, and except for a handful, they all have ripe cherries on them.  I’ll be grateful when the season is over and we’re done picking.  But I’ll be even more grateful to reap the joys of this harvest.  As tedious and time consuming as the season is, there is nothing better than drinking your very own coffee.

We filled our first bag of dried coffee bean with parchment still on it.  It will stay in the burlap bag for about 3 months before we remove the parchment and begin roasting. 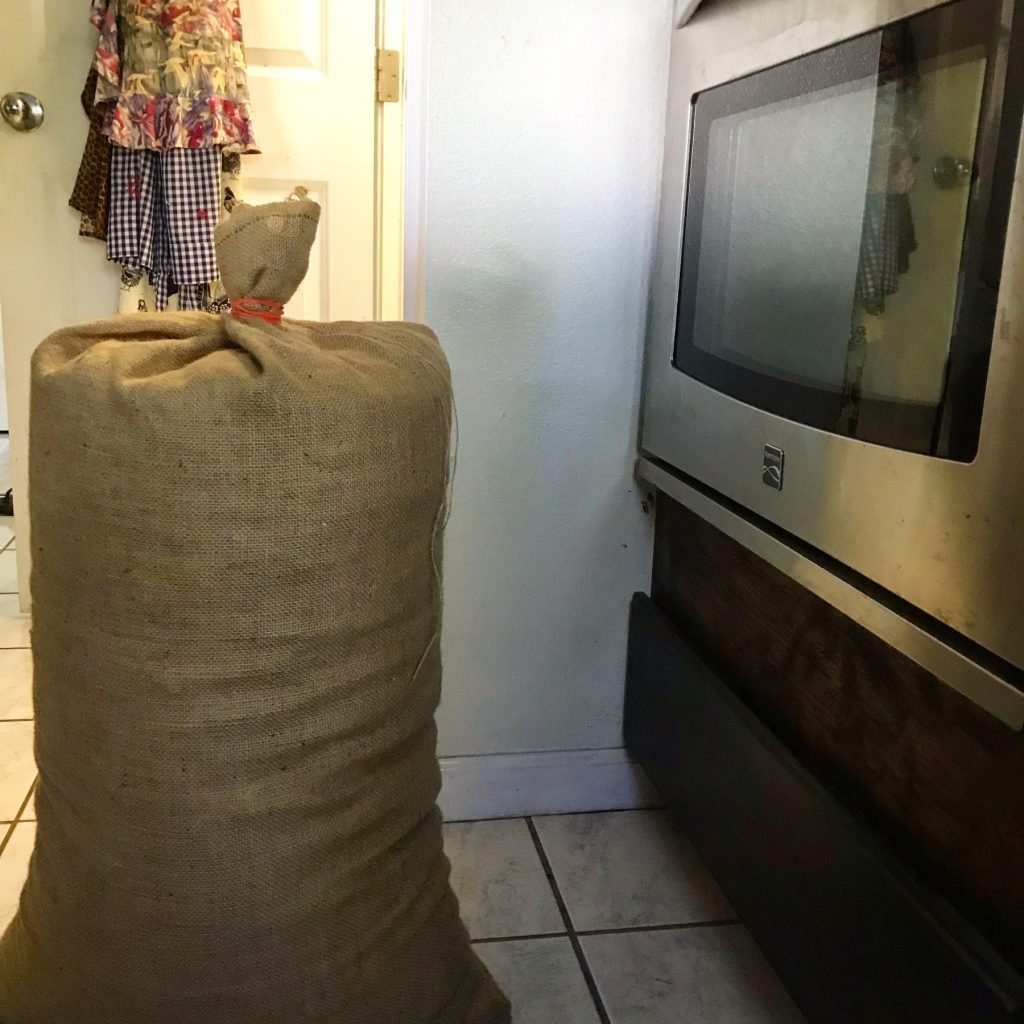 All this coffee picking has inspired me and I made my first batch of coffee liqueur for the season.  The coffee liqueur is made with cold brew coffee, rum, vanilla, cinnamon, and a brown sugar simple syrup.  Homemade liqueur is always a nice gift, but made with our coffee makes it extra special.

I also made a coffee scrub soap last weekend. 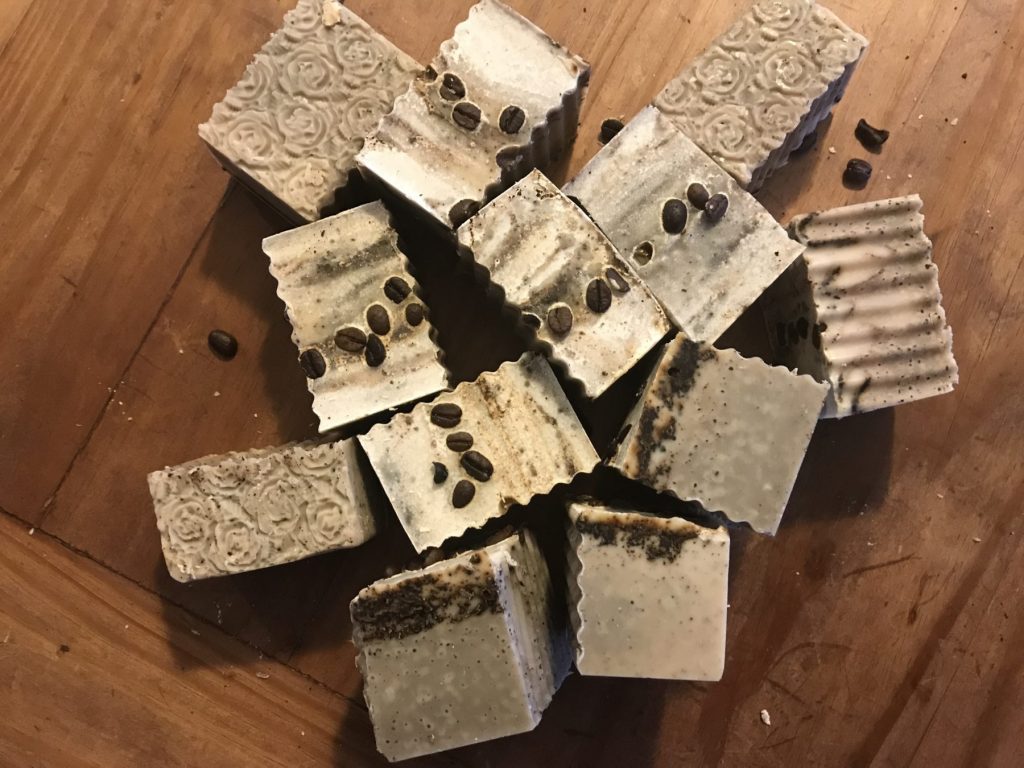 It came out really pretty looking, and smells really good.  Well really good, if you like the smell of coffee that is; and I do.  It’s a coconut oil based soap, and the combination of the coffee and coconut make it smell like a coffee latte.  It’s been curing for a week, so I tried it today.  Although I used a fine grind, it’s a pretty strong scrub.  I like it, but based on a papaya scrub soap I made earlier, I know some will find it too rough.  It’s a great farm soap.  I will say, I was a little worried about smelling like coffee after I used it, but I don’t.  Coffee grinds make a great scrub because 1) coffee is an antioxidant, 2) coffee grinds are a natural exfoliant, 3) used as a scrub, the grinds can help reduce the appearance of cellulite, and 4) the caffeine in the coffee has a tightening effect on the skin.  To make the soap, I reused coffee grinds from our morning coffee to make a cold brew coffee as a base liquid for the soap.  I then used the actual grinds in the soap itself to give it the scrub effect.

We’ve also been been busy picking hibiscus for tea.  While picking the hibiscus is less time consuming than picking coffee, the processing of the tea is tedious.  It took me about an 2 hours to separate the calyx from the seed pod from a 5 gallon bucket. 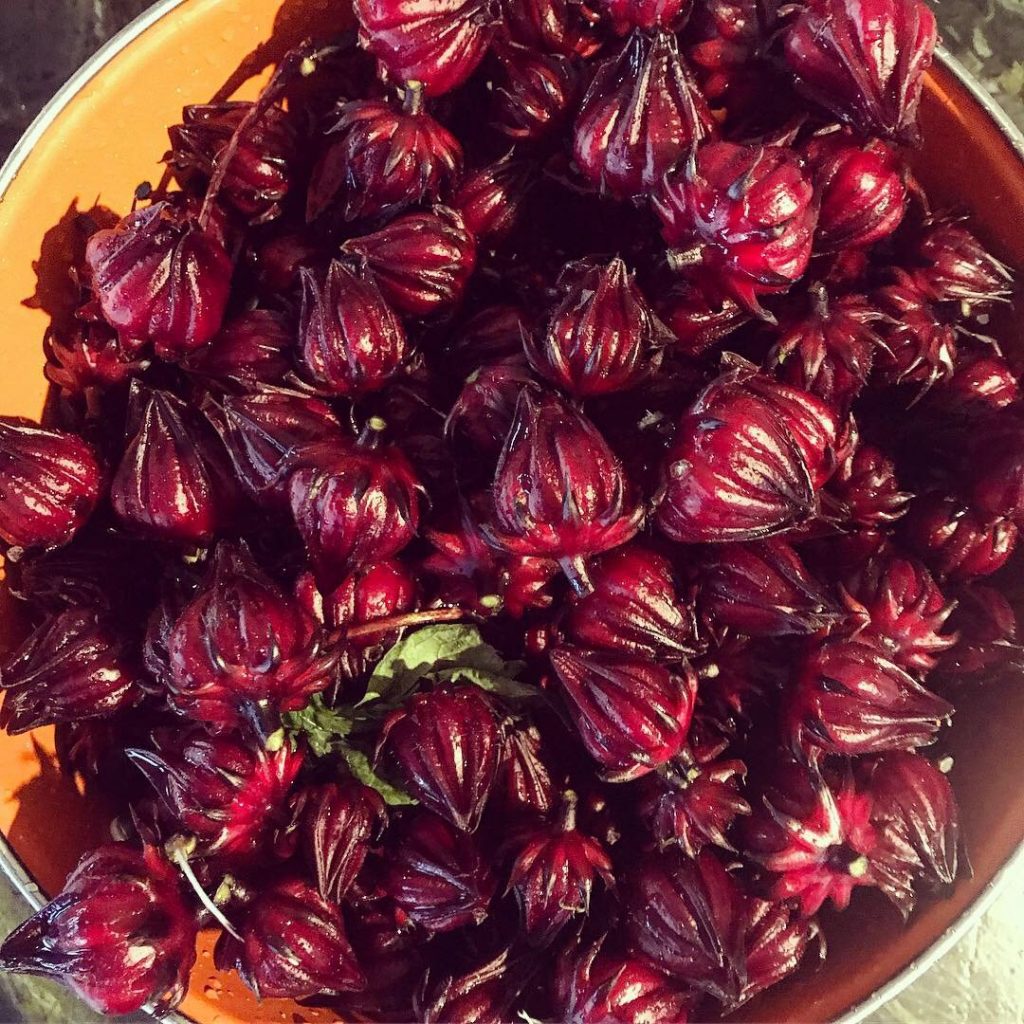 Our hibiscus tea is a favorite among family and friends.  We have a small patch now, but are looking to expand this product, and hopefully get it in our shop too. I also made a hibiscus tea soap a few weeks ago.  It’s been fun experimenting with the many things we grow to create these unique soaps.

End of the Season