We’ve had a lot of rain the last few weeks.  While this is certainly a good thing when your sole source of potable water is rain, it also means little work gets done in the garden.  Today the rain is clearing; we have some nice trade winds, and it’s just beautiful outside.  The grass is quite long, so my husband is outside mowing.  Bailey, our new pup, is very scared of the mower, so she is currently hiding in the closet of our bedroom.

It’s spring, so ducks are mating.  We had four baby Call Ducks recently hatch.  Unfortunately, we only have one left.  We’re not positive what took them, but believe it to be a large rat.  We have the area where our ducks are at well fenced and protected, but this rat burrowed a tunnel underground and into the pen.  It’s heartbreaking.  We’ve moved the pen to a new area and have a chicken sitting on a bunch of ducks eggs currently.  Hopefully we’ll get a new batch soon.  We’re hoping we have better luck with this batch.

Call Ducks are a small breed of bantam ducks.  They were primarily used by hunters as the females have a distinct “call” that would bring other ducks into the area for hunting.  For the homesteader, they’re not a variety you would grow for eating, but rather keep for pets.  These ducks are really beautiful and diverse looking.  They have personalities, and distinct voices.  The male ducks do quack and make noises, but the females are loud, and talk way more than the males.  Yep, they’re quite the opinionated group, but I’ve always been a fan of strong women with voices. 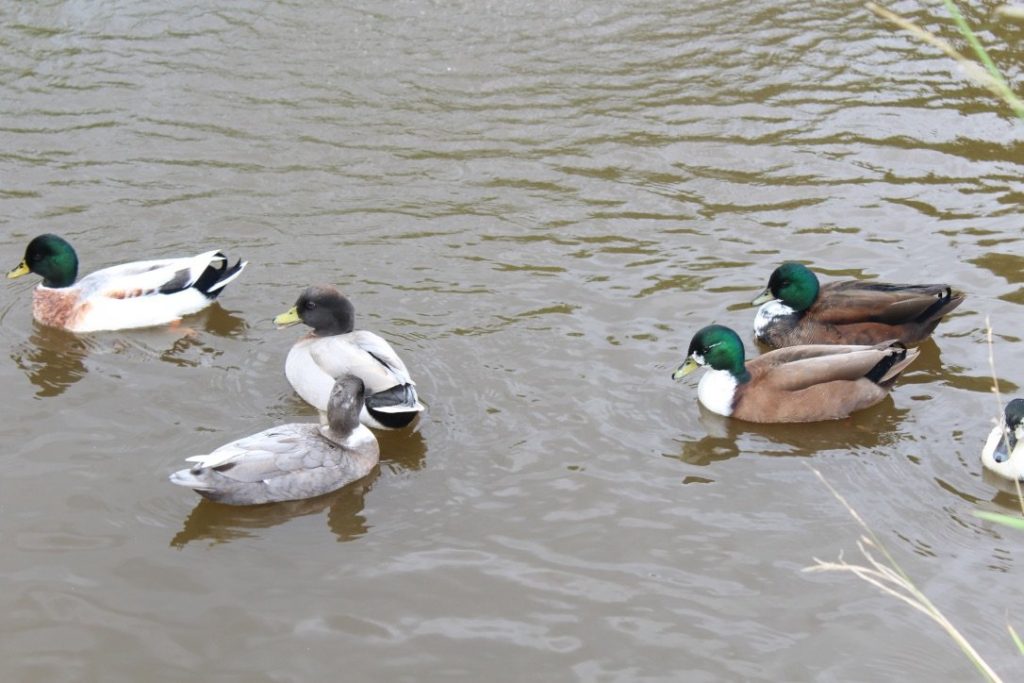 You can tell the male from the female not only by their call, but also by the feathers at the back end of their bodies.  Look at the duck on the far left and you’ll notice that his back feathers curl up a bit – that’s an indication he is a male.  As you look at the other ducks in the picture, you’ll be able to pick the males out too by this same feature.  The duck on the left is named Pixen.  He had a sister named Pixie.  They were both runts in their litter, so they were even smaller than the regular call ducks.  It took a long time for him to grow, but he persisted, and now you would never know he started out so small.  Of all the call ducks we have, he is my favorite.  His coloring is unique, and he is just beautiful.

During mating season, they pair up.  We have more males than females currently so there is a little jealousy and fighting over the girls.  Once it looks like they’re laying, we protect the eggs by putting them in an enclosure so that rats and mongoose, and other creatures (including toads) don’t eat the eggs.

For those completely unfamiliar  with ducks and eggs for hatching, the gestation period is between 26 – 28 days.  I never understood why if it took approximately 28 days to hatch, did all the babies come roughly at the same time.  This is because the eggs don’t start to incubate until the duck sits on them.  So she’ll lay a bunch of eggs over a period of time, and then begin the incubation process.   The heat created by the mama sitting on her eggs starts this process.  The mamas will leave their nests during the day to get food, but when they do, they typically cover the eggs with feathers and nesting material that’s available.  We have hay available for our ducks.

Our ducks get along with the chickens and geese and all eat together.  We do sell them occasionally when our flock gets large, but due to the large number of predators, our numbers are kept small.  Plus, I love them all, so it’s really hard for me to part with any of them. We set traps around the farm to keep predators at bay the best we can, but there’s no way to keep them out altogether.

We also recently acquired two new geese.  They’re both boys and are named Pippen and Paddy.   We got them the week before St. Patrick’s day, and I held a little contest on Instagram to name them.  My husband picked them up for two reasons.  One, we only had one female goose left.  Her mama died suddenly, and she was left alone.  While I thought she was getting along fine with all the other fowl we have, my husband thought she was lonely.  Hence Pippen and Paddy came along.   The second reason he got them is he is hopeful maybe they will breed with her.  They’re beautiful, and they’re supposed to be a really docile breed, but well … they’re not.   They’ve already bitten me a few times, and boy can they run fast when they’re chasing you.   After they’re fed, they are way calmer, but it’s difficult to get the feed to them quick enough when they’re chasing after you trying to bite you.   I’m hoping if they do breed, the babies are like their sweet mama.

This was one of the first days after we got them.  Don’t let those cute faces deceive you.  They tricked me into thinking they were sweet.  But alas, that has since changed a bit.  I will say, they are good guard geese, and with agricultural theft a problem on our island, they will do an awesome job protecting our farm!  Maybe, just maybe, we can get them to chase mongoose and rats!